What Traders should know about Leveraged Tokens

The benefits of leverage adjustments can be seen in the following example. Imagine $10,000 allocated to a standard 3x long ETH/USD position and $10,000 allocated to ETHBULL, a 3x ETH leveraged token. Given a market price of $100/ETH, the $10,000 can be used to purchase the notional value of 300 ETH worth of exposure. Similarly, 1 ETHBULL token can be purchased with $10,000, with each ETHBULL token equating to 300 ETH of exposure.

Over a period of 5 days, the price of ETH increases at a rate of $5 a day. After the close of the 5th day, ETH price has increased by a cumulative 25%, and the 3x long position has returned 75% on equity. ETHBULL in the same 5 day period has returned 90% on equity – this is because, after each day, the profits of the position are reinvested to maintain 3x Leverage. The standard 3x Long trade actually decreases in overall leverage as the PNL & margin increase with ETH growth. This can be seen by comparing the changes in ETH Exposure of each position.

Given an increase of 25% in ETH Price, the 3x ETH short sees an expected -75% ROE while ETHBEAR, a 3x Leveraged Short token, only sees a -52% ROE. This is due to the deleveraging of ETHBEAR’s position after every daily decline in ETH price. By the start of the 5th day, ETHBEAR only has 136.79 ETH short exposure compared to the standard 3x ETH short which has retained its 300 ETH short exposure.

We can conclude that during a high trending market, leveraged tokens tend to outperform due to the automatic daily rebalancing. Let’s observe what happens in a choppy market.

ETH opens and closes the 5 day period at the same prices as in the previous scenario. However, this time it first drops to $80 before closing at $125. During the dip, ETHBULL reduces its ETH exposure down to 175 ETH. This means that while ETHBULL fared better than the 3x Long at the close of Day 2, the reduction in ETH exposure caused it to underperform on the larger move up. The 3x long returns 75% compared to the 51% of ETHBULL.

On the short side of things, we see a similar effect.

On the move down, ETHBEAR outperforms and almost doubles its ETH short exposure, but quickly rolls it back once ETH price starts increasing. The 3x short returns -75% compared to the -76% of ETHBEAR.

The phenomena we have discussed is known as Beta Slippage.

The scenarios above were hypothetical situations, but leveraged tokens have been out long enough that we can actually analyze their performance and identify the amount of beta slippage they see in the real market. We can do this by comparing the price of ETHBULL/ETHBEAR between two timepoints in which the price of ETH was the same.

In order for us to conduct this analysis, we must also identify the amount of funding and maintenance fees incurred by the leveraged tokens. FTX leveraged tokens gain their exposure through holding/trading perpetual swaps which are subject to funding rates. Long/Short perpetual swap contracts held in the basket can either benefit or lose from funding. Additionally, FTX charges a 0.03% daily management fee. 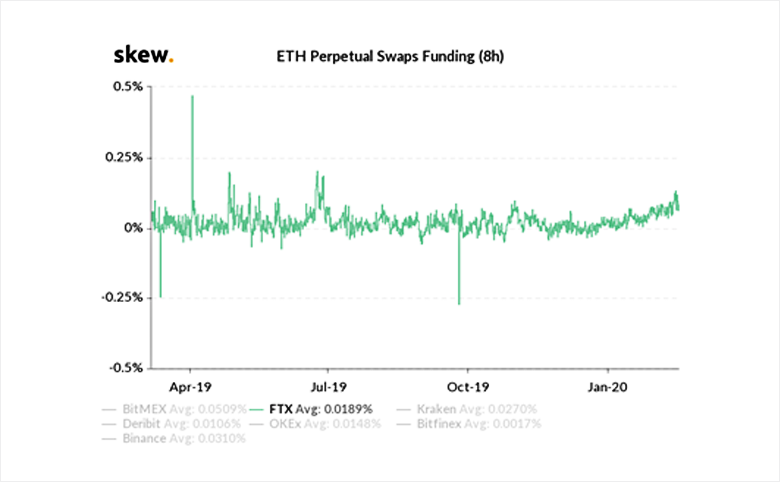 According to skew, the ETH perp averages a 0.0189% funding rate per 8 hour period which translates to 0.0567% daily funding (longs paying shorts).

During this 134 day period, Both ETHBULL and ETHBEAR saw similar drawdowns of -63%. While compounded cumulative funding & maintenance fees both contributed to the drawdowns, it can primarily be attributed to the beta slippage realized by both tokens. In fact, ETHBEAR even received substantial funding gains.

Any pool of capital algorithmically and transparently rebalancing its positions, no matter how well-conceived, will attract frontrunners if sufficiently large.

Nomura’s Nikkei (2X) Leveraged ETF became so large that it dominated price action in the underlying Osaka Nikkei futures markets and had to halt subscriptions. If ETHBULL or ETHBEAR’s rebalance became a large percent of daily volume on ETH itself during that period of time, then astute traders could calculate the amount of ETH that these tokens had to trade and pre-position accordingly before the rebalance and then later sell into the rebalance.

In the VIX markets, traders could anticipate the rebalance flow thusly:

They can bid up the price of the second-month futures constantly, and depress the price of the front month the closer it gets to expiration. This creates a kind of inexorable contango maelstrom, which is brutal for long-holders of the ETFs.

Such frontrunning became so rampant in the US commodity ETF market that several ETFs had to either drastically alter their rebalancing protocols or delist.

For FTX itself, its tokens rebalance at 2AM UTC daily. Whether frontrunning is occurring already or not can be an exercise left to our more sophisticated quant traders. 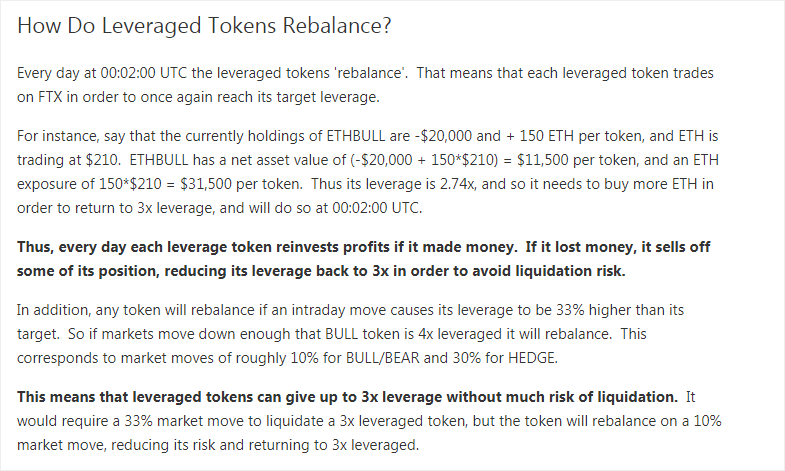 In general, leveraged tokens can take advantage of momentum effects to outperform non-rebalancing leveraged positions but underperform during periods of high choppiness/reversion. It’s important for traders to keep in mind that unlike non-managed positions, the performance of leveraged tokens is path-dependent. They should also be aware that as the assets under management of these tokens grow, they become targets for sophisticated traders. Leveraged tokens are best used by traders during shorter time frames or during periods of expected trending price movement.

DeFi Growth Hacking: How To Inflate Ur Volumes & Moon in 7 Days

The Future of On-Chain Trading

About price action and the relation to volatility